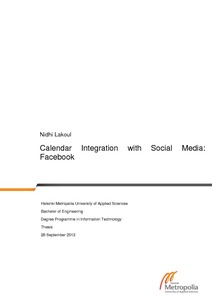 The Facebook connect SDK (Software Development Kit) was identified as the key player in the integration business which provided readymade code to embed into the Facebook application that was created during the project in order to exchange information with iPhone application, that is, the Student Calendar. The Graph API was found to be the core of the Facebook Platform to enable developers to read from and write data into Facebook. All the targets of the project were achieved although there were some complexities within the platform components.

Nowadays, integrating applications with social networking sites are becoming popular which is attracting more developers. In such a context, the application developed has a great demand. This application can be useful for students and those who are fond of using Facebook. The application has some important features of Facebook, such as a post-on-wall, view news feed or checking a friend’s birthday, so the user does not have to go through the Facebook page for these functions. The procedures that were taken during the application have been documented in detail, so the thesis can be used as a guide for developers, and those who have interest in how integration is done can have a glance at it.