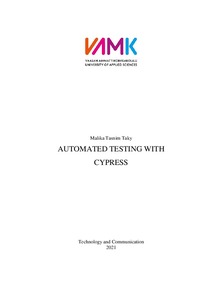 Taky, Malika Tasnim
All rights reserved. This publication is copyrighted. You may download, display and print it for Your own personal use. Commercial use is prohibited.
Näytä kaikki kuvailutiedot
Julkaisun pysyvä osoite on
http://urn.fi/URN:NBN:fi:amk-202105026582

This thesis document describes a practical work completed in Nokia. There, the Roadmap Online (RON) development team was looking for an automated testing solution for an ongoing web project. The team wanted to have a Graphical User Interface (GUI) testing solution to test a web application. The purpose of this test environment was to run the test cases reliably and faster. It also required to test the whole system after each new implementation. Moreover, the testing needed to be straightforward. The team wanted to ensure the performance of the applica-tion from the users’ perspective. Thus, the testing environment was built with the testing tool, Cypress and more than 100 test cases were implemented.
The tested application has various features. Some features are depending on the other features. Thus, the test cases were divided in two sets: 1) full system test cases and 2) targeted test cases. The full system test cases examined the whole cycle of the application and the targeted test cases were to check specific fea-tures.
With the help of numerous built-in commands of Cypress, it was convenient to implement the test cases. Moreover, having the flexibility of building custom commands made the execution simple. Cypress comes with an interactive dash-board named “Test runner” which was very useful to visualize the tests running gradually. The efficiency of testing was 75% since it varied according to the pro-cessor speed. Before the application deployment, the test cases were able to find intended bugs. Testing with Cypress was easy and well guided. Cypress has a vast community with developers and professional testers all around the world who are very cooperative. The RON development team was pleased with the so-lution. It seemed promising to them.
Currently, the application has a fully working automated test environment which reduces the team’s effort of testing the GUI side manually. It has test cases for both full system test as well as targeted test.