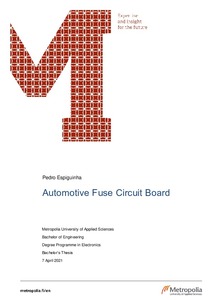 Espiguinha, Pedro
All rights reserved. This publication is copyrighted. You may download, display and print it for Your own personal use. Commercial use is prohibited.
Näytä kaikki kuvailutiedot
Julkaisun pysyvä osoite on
https://urn.fi/URN:NBN:fi:amk-202105036686

The main goal of the work encompassed in this thesis was to answer a real need for a product from Sensible 4 Oy, which would allow for a faster and easier alternative to troubleshoot issues, while at the same time reducing the physical dimensions of components used and decreasing assembly time.
Briefly, the purpose of this product is to guarantee the safety of autonomous systems installed in manual vehicles and allow the control of the car to be safely switched between manual and autonomous mode.
The board was designed in KiCad and special attention was paid when choosing components to ensure that they were suitable for this application. Specifically, automotive components that met the AEC-Q200 standard were selected.
After a brief period where all project requirements and constraints were established, the design phase was initiated. A few flaws that were identified with the previous practices and components were added to the list of improvements to be implemented.
The selection of components took an unexpected long time, mainly due to the strict requirements for all components, although the lack of experience in this area might have played small role too.
While future improvements were already identified, which would further contribute to a better product, the final product meets all the requirements within the initial constraints and represents an improvement in safety and reliability.
For the aforementioned reasons, the outcome of this project can be regarded a success.