Studying the Architecture and Signaling Flow of SIP 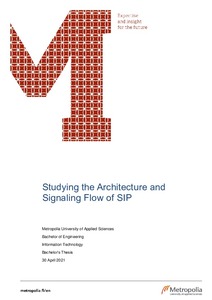 Khadka, Niruj
All rights reserved. This publication is copyrighted. You may download, display and print it for Your own personal use. Commercial use is prohibited.
Näytä kaikki kuvailutiedot
Julkaisun pysyvä osoite on
http://urn.fi/URN:NBN:fi:amk-202105046961

The main purpose of this thesis was to explore Session Initiation Protocol (SIP) and its signaling methodology. The functions and the importance of this protocol in the field of Internet Telephony are discussed. Similarly, it also explains the overall architecture and important components used in signaling along with their functionalities. The structure of SIP messages and process of signaling flow between entities over the internet is covered in this study. Roles of other protocols used alongside SIP in VoIP industry is also explained.

The author has taken the approach of literature review in conducting this study. Various online sources on SIP were accessed in the beginning. Out of those, 15 were sorted and used for the purpose of this study. The key information collected were then analysed practically by setting up simple open-source SIP clients and studying the signaling logs of test calls between them.

SIP (Session Initiation Protocol) is one of the most common protocols used in VoIP technology. It is an application layer protocol used for establishing, modifying, and terminating multimedia sessions between the two endpoints over the internet. The standard form of this protocol is defined by IETF (Internet Engineering Task Force) in RFC 3261. SIP generally uses SDP (Session Description Protocol) and RTP (Real-Time Transport Protocol) for describing sessions and carrying media over IP network respectively. Since, it is text- based protocol, signaling messages passed between the endpoints is simple and easy to understand.

This thesis can be useful to have an overall understanding of SIP protocol, its architecture and application in the Internet Telephony industry.