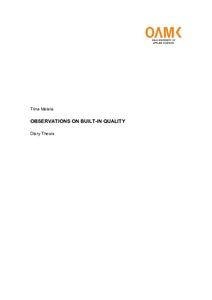 Matala, Tiina
All rights reserved. This publication is copyrighted. You may download, display and print it for Your own personal use. Commercial use is prohibited.
Näytä kaikki kuvailutiedot
Julkaisun pysyvä osoite on
https://urn.fi/URN:NBN:fi:amk-202105077681

The thesis was written in a diary form consisting of five and a half observation weeks of which three weeks included author’s participation in release testing. The theory covers built-in quality of SAFe model and agile testing. Shift left testing and quality assurance have also been examined on quality aspects.

The results of this thesis are that Enerim Oy is or is going to be implementing solutions to achieve built-in quality, such as early involvement of testers in planning and gradually increasing the level of test automation. However, there were many factors discovered, which could still be improved or are currently missing. Shift left testing was not happening in TDD, BDD and HDD. Quality standards and controls were lacking or being communicated inadequately.

To benefit the most of test automation, there should be individual plans made with a thought for each team since the needs vary. Shift left testing is not widely implemented in different organizations regardless of its benefits. There are several reasons for it, but one major reason is that shifting left requires additional human resources to testing and development. Otherwise, it may double the workload in the beginning.