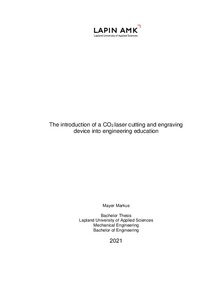 The engineering education at Lapland University of Applied Sciences is apparently already very diverse. The practical part of the education is supported by a number of laboratories and practical work. This Bachelor’s thesis deals with the integration of a new device into this environment. The device under investigation is a compact tabletop laser cutting and engraving device that expands the possibilities of the students in terms of their projects and knowledge growth. It is manufactured by Flux and the product name is BEAMO. The work is roughly divided into three major parts consisting of theoretical basics, the testing phase and the development of projects.

Work began with a comprehensive research on the topic of laser technology. This was important to understand the possibilities of the own device and the theory behind the obstacles, limitations and problems encountered. During an extensive test phase, 11 different materials were examined using a standardised test scheme and other limiting factors such as resolution and influence of the focal point were analysed. The results of the cutting operation were digitised for better clarity and all obtained test samples are available for inspection at the 3D printing laboratory of Lapland University of Applied Sciences in Kemi.

The results of the test phase were then used to draft recommendations for later users, which are recorded in the guidebook. Since all the materials used could be processed under the conditions recommended by the manufacturer, there were many possibilities for independent projects. Due to the ease of use of the device and the short processing times compared to additive manufacturing processes, this device will now be able to make a valuable contribution to the training of young engineers in the future.