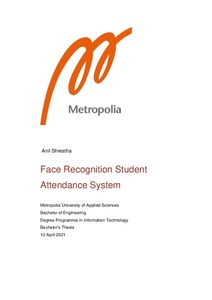 Shrestha, Anil
All rights reserved. This publication is copyrighted. You may download, display and print it for Your own personal use. Commercial use is prohibited.
Näytä kaikki kuvailutiedot
Julkaisun pysyvä osoite on
http://urn.fi/URN:NBN:fi:amk-2021061415938

This project aimed to implement LBPH in Django to create a facial recognition system. The system was used to be implemented in student’s attendance. The goal of the project was to study Django and web development and implement it to create a working web application.

For this project, the author had to research face recognition technologies. FacialRecognizer class was implemented that comes with OpenCV for facial recognition. OpenCV was used in Django to create the web application.

The project proved to be an effective way to learn new tools and technologies and implement them in a project. Although most of the technologies were new to the author, the development and implementation of the system went smoothly. However, the desired result was not met. The success rate of the project was less than expected. There is room for improvement in the project and the success rate can be increased.