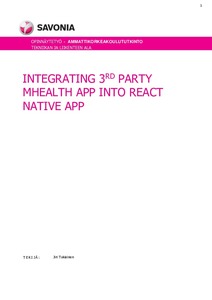 Tukiainen, Jiri
All rights reserved. This publication is copyrighted. You may download, display and print it for Your own personal use. Commercial use is prohibited.
Näytä kaikki kuvailutiedot
Julkaisun pysyvä osoite on
http://urn.fi/URN:NBN:fi:amk-2021062316608

The goal of this thesis was to investigate the mHealth application markets of the two biggest mobile
operating systems, iOS, and Android. The aim was to gather enough knowledge of existing applica-
tions, so the decision, which application to integrate into, could be made. Based on this investiga-
tion, the integration between the client’s application and one third-party application was carried out.

mHealth and its possibilities for healthcare providers and application users and other aspects such
as the markets and challenges were addressed in the theory part of this thesis. The selection of the
biggest mHealth applications available on iOS and Android and their download counts were also
covered. Finally, the library used in the client’s application, React Native, was introduced. In the
practical part of this thesis, an integration between Apple Health and the client’s application was
done by using a library called react-native-health. Apple Health was chosen as it is possible to get
data from multiple third-party applications through it. It is also one of the stock applications on iOS,
so the userbase is high.

As a result of this thesis, the library was taken into use successfully and reading and writing data
between the two apps was implemented. Additionally, non-existing functionalities were added to
the library.