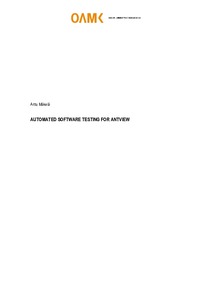 Mäkelä, Arttu
All rights reserved. This publication is copyrighted. You may download, display and print it for Your own personal use. Commercial use is prohibited.
Näytä kaikki kuvailutiedot
Julkaisun pysyvä osoite on
https://urn.fi/URN:NBN:fi:amk-2021091217705

This thesis was commissioned by Verkotan Oy. Verkotan Oy provides testing and consulting services in the wireless industry. AntView is a tool for visualizing, analysing and storing antenna measurement data via web user interface written with the JavaScript’s React library. It uses the Django web framework and MongoDB in its backend.

The aim of the thesis was to provide Verkotan’s AntView software with an automated testing pipeline.Test scripts were created with Python to test AntView’s Python API and the underlying parameter calculation functions. An automation server using Jenkins and Docker was also set up for AntView to be built and tested. This server pulls, builds and tests the application by using Jenkins, and while deployed it can be used as a platform for manual testing and test develop-ment.

The result of the thesis was a functioning Jenkins automation server operating on a Debian 10 host along with Python test scripts testing AntView and its Python API. Test results are viewed via Jenkins’ web user interface. This project was a good opportunity to learn about testing in software development, Linux, Docker, Jenkins and about the concept of continuous integration and continuous development.