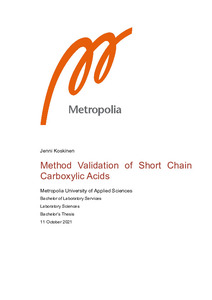 Koskinen, Jenni
All rights reserved. This publication is copyrighted. You may download, display and print it for Your own personal use. Commercial use is prohibited.
Näytä kaikki kuvailutiedot
Julkaisun pysyvä osoite on
https://urn.fi/URN:NBN:fi:amk-2021101118523

This thesis project was done in Research Analytics Team at the Chemistry Department of Neste Oil Research and Development. The aim of the study was to validate an existing analysis method in a new bio-oil based sample matrix called brown grease. The analysis method was used to detect short chain carboxylic acids from water and bio-oil based samples using LC-MS and LC-UV techniques after the liquid-liquid extraction. Analytes were quantified using internal standards. The instrument used in this validation was Shimadzu LCMS-2020 which combined liquid chromatography and mass spectrometry. The liquid chromatography separation method used was ion exclusion chromatography, which was coupled to both MS and diode array detectors. The compounds were ionized using electrospray ionization in negative mode prior to the MS detection. In this validation, limit of detection (LOD), the limit of quantification (LOQ) and the method accuracy of analytes were determined. The method accuracy was determined using precision and trueness. Samples were prepared in three spiking levels, and they were analysed 6─9 times including the non-spiking samples over 2─4 weeks. The limit set for precision was 25 per cent and for trueness 80─120 per cent. For LOD and LOQ there were no set limits. Most of the results were within these parameters and as result the sample matrix can be analysed using the existing method for sample preparation and analysing.