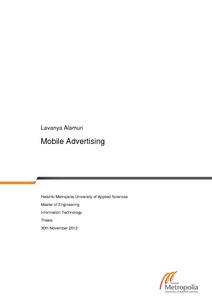 To provide credibility to the project, case study was employed as the research strategy where the data was collected by interviews. The interviews were transcribed to serve as an input for data analysis. Data was analyzed using pattern matching and cross-case synthesis techniques. Based on their industry expertise Steam Communications and Luxus which has mobile as one of their advertising media were chosen as case studies. Relevance to the stated factors and forms of mobile advertising was analyzed and reported. Single case analysis was performed using pattern matching technique
and an analogy was drawn that Branding Strategy, Service Costs, Personalization and Privacy were factors that affected mobile advertising adoption and forms of advertising on a mobile including SMS, M-Coupons.

Since both the case studies were not established in location-based services and in-application advertising, no relevance was found with respect to those forms. Crosscase synthesis between the two case studies further strengthened the hypothesis that Branding Strategy, Service Costs, Personalization and Privacy were the common factors
that affect mobile advertising adoption and forms of advertising on a mobile including SMS, M-Coupons.

However apart from the above stated factors and forms of mobile advertising both the companies stated that awareness of the potential and readiness of the market to embrace the latest technological integration to a mobile were additional factors that affected the mobile-advertising adoption. Possible other forms of advertising on mobile could include integration of videos, web and digitalized services.