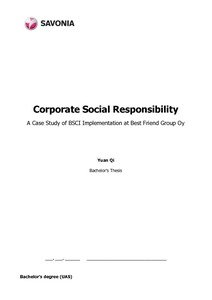 With the current polarized debate over CSR issues worldwide, ever increasing number of companies believe that incorporating ethical values into the business operation is an attractive option to upgrade the brand value, maintain the competitive advantage and cater for the social demand of various stakeholders. Business Social Compliance Initiative, a division of FTA, serves as a platform to assist companies in achieving the goal.

The study was commissioned by Best Friend Group Oy, a medium-sized wholesale company headquartered in Kuopio, Finland, whose aim was to advance its business success through the redefinition of the corporate supply chain in relation to the risk countries by conducting the BSCI social audit on the suppliers involved. The objective of the thesis was to generate a comprehensive picture on the current status of the suppliers in terms of the corporate social performance and their readiness for the upcoming audits as well as the obstacles to have encountered.

The research was preceded by an overview on the theoretical framework of the CSR implementation in general, presented in reference to the well-established theories of triple bottom line, three-dimensional conceptual model of corporate performance and CSR business cases. The research consisted of both qualitative and quantitative methods, manifested in the semi-structure interviews and the survey with the suppliers involved.

The research result indicated that a small portion of the suppliers were considered ready for the audit with the rest of them who had a wide gap to merge before being completely compliant with the BSCI social standard. The obstacles for the suppliers to overcome in the process of the social compliance were identified. In the end, a series of recommendations for further research were made to the case company. One recommendation in particular was for BFG to find out the personnel stand and the change to their daily work, brought by the BSCI implementation, in assistance to succeed in the sustainable evolution into a socially concerned international entity.