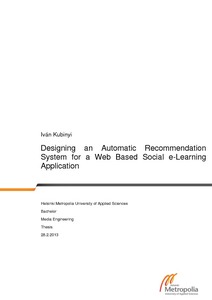 The purpose of this study was to create a prototype of an automatic recommendation
system to demonstrate how recommendation systems work, what the possible pitfalls are
and how they can be avoided. The results were evaluated from Bitville's web based social learning application’s point of view.

First the concept of social e-learning is introduced. Then the technology and the taxonomy of the recommendation system are presented. Some of the mathematical tools that are the base of recommendation engines are introduced and it is shown how they can be used in applications.

The outcome of the study was a working prototype that was built on the same programming framework as Bitville’s social e-learning application, thus it can be incorporated.

With the prototype it was proven that it is possible to build a recommendation engine that takes into account the ratings of the users for different content items and in this way bringing the social element into the recommendation process.