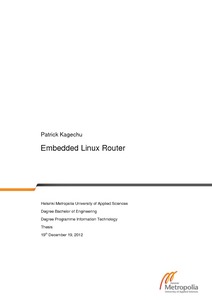 The goal of project was to show that a working router could be developed using readily
available embedded devices and readily available software under the Linux operating system.
The project also brought two multi-disciplines together, which are networking and
embedded engineering. The project also tried to highlight the reusability of readily available
software that is on the Internet.
The project was carried out firstly by defining the functions a router does and which functions
are meant for industrial and small home routers: the additional services it needs to
offer more value to the user and later defining the software and drivers needed for all this
to be able to work properly. The additional software installed were Webmin for providing a
graphical user interface and a way of configuring the dreamplug, bird routing software for
handling the dynamic routing protocols. The other applications used were word editors for
editing the configuration files.
The functionality of the router was tested both through systematic troubleshooting of the
network files some of which, with any change made were fatal while others rendered the
dreamplug unresponsive. The router worked and some of the tools used were iperf,
netstat, ipconfig among those found in the Linux networking utilities.
The results showed that the dreamplug can handle as much as necessary for a Small Office
Home Office type of ecosystem. The project also showed that there is more than
openly available software to ensure proper running and routing of software.