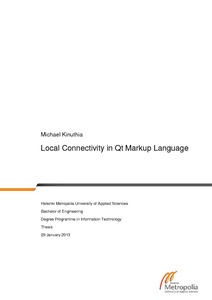 The objective of this thesis was to study Qt/QML, NFC and Bluetooth technology, with the aim of investigating how data is transferred from low level NFC to QML application level. The knowledge gained was to be used to develop a QML-based application to demonstrate the local connectivity of Bluetooth and NFC. The target device was the Symbian phone for which Nokia 603 was selected in this project for demonstration purposes.

The project was carried out in two parts first, the theoretical part and the practical part. The theoretical part entailed studying of Qt platform, QML language, NFC and Bluetooth tech-nologies. Qt and QML were used as the development environment and development lan-guage respectively. NFC was used to trigger the local connectivity and Bluetooth aided in the transfer of user input from one phone to the other and vice versa. The basic idea, which was the practical part, was demonstrated by developing a sample game that could be played by two players, data was transferred over Bluetooth and the connection was initiated by NFC. In the game data transfer was initiated by NFC that started the Bluetooth pairing and connection. The Bluetooth connection was then used to pass the data from one phone to another phone.