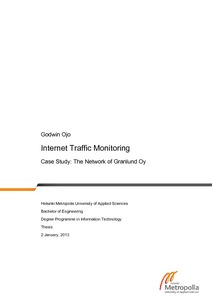 The goal of this final year project was to design, implement, and analyse the results of Internet traffic monitoring processes using the network of Granlund Oy as a case study. The main motivation behind the topic was to provide a concise analysis of the Internet traf-fic of a medium-sized enterprise network traffic. Furthermore, the project examined the network traffic to find bad traffic logs that negatively affected the network performance and security in general.

The results of the project were the prevention of harmful traffic from entering into the network, the discovery of unsolicited traffic being generated in the network by infected hosts and the enforcement of the company’s web access policies. These results helped in improving the usage of network resources and improved network performance because the infected hosts were cleaned and the existing bad traffic was removed and prevented from entering the network at gateway level, thereby increasing overall network security.