Design and Simulation of Tail Lifts for Truck 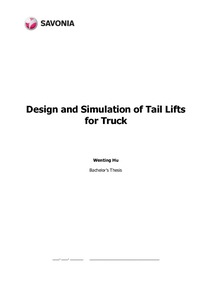 Tail lifts are widely used in the EU and USA. They are the most common equipment fixed on trucks which are used for loading and unloading cargo because they make transportation to be more economical, more efficient and safer. With the rapid development of China economy and logistics industry, tail lifts will certainly have a significant development in Chinese market.
The mechanical system is certainly the most important part of tail lift because it is carrying the load. So the safety of the system should be guaranteed. The goal of the thesis is to design a reasonable and safe mechanical system of tail lift for a certain type of truck.
Studying the principle mechanism was the first step. When this process was finished, creating the models for all components in Inventor system began. After completing the models, the dynamic simulation and stress analysis were conducted. Finally, according to the results of stress analysis, the revised model was created.
There are two sets of mechanical systems in this thesis. The first set has some disadvantages which result in large stress in the system. The modified set improved the strength and made the maximum stress and deformation in limit. The whole mechanical system of tail lift has been accomplished.