Adoption of Twitter in Finland: the young Finnish speakers 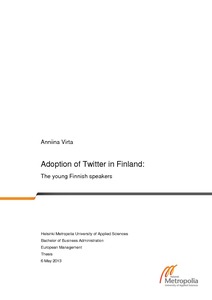 Twitter has made advances in the world for past two years and keeps raising the number of user accounts constantly all over the world. Many companies have taken advantage of this consumer movement to a new social media form introduced in 2006. Twitter offers different kinds of obstacles for companies compared to other social media tools being one of the tools where the information expires in a fast pace. The compact, yet effective communication tool is inviting every kind of discussion in real time for users all over the world. All the content is public and users can collect thousands or even million followers to read their tweets daily.

In Finland Twitter has not achieved the similar popularity as in the world. The study focuses on discussing the reasons according to diffusion process, characteristics accelerating adoption and the tipping point theory as well as tackling the cultural aspects of Finland and their effects on adoption of innovation and the speed of the process. The focus is on the young Finnish speakers.

The survey conducted for the study offers insights to the use and the lack of use of Twitter by young Finnish speaker. The aim is to find behavior patterns in the use of Twitter as well as find out the reasons why Twitter does not have more users. The conclusion and recommendations offer some recommendations for Finnish companies using or planning on using Twitter in the future as a part of their social media plan.