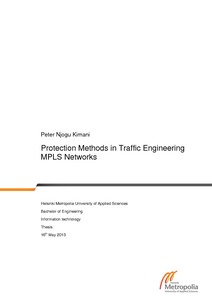 The project was carried out first by introducing VPN (Virtual Private Network) and its different categories and modes. VPN is closely related to MPLS. The MPLS-TE was introduced and its operations and protocols. Traffic Protection methods and schemes were also explained in depth. In particular, the focus was on link protection and the different schemes used for local protection. The link protection using FRR (Fast Rerouting) with 1:1 scheme was configured on an ISP network. Testing was done before and after a link failure.