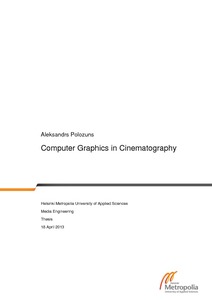 The purpose of this thesis was to cover the major characteristics about different techniques presently used in the field of CG and visual effects by giving a variety of examples from the famous movies. Moreover, the history of visual effects and CGI, and how the development process of it changed the industry of cinematography were studied. The practi-cal part of this study is dedicated to analyzing what modern software are the most popular ones among professionals. Several studios were surveyed to find out the most preferred contemporary software for production of CG and visual effects in the motion picture among Finnish based and international studios.

The second part of this thesis covers a project which aimed at finding a solution for one of the contemporary motion graphics techniques. A modern method was used for production of VFX, in particular 3D compositing, by which a 3D character is implemented into a real video footage. For 3D compositing four different software– 3Ds Max, Boujou, Photoshop and After Effects were used. As a result of this thesis the leaders among the software de-signed for motion graphics used in Finland and other countries were discovered.