A Remote Desktop Application For Android 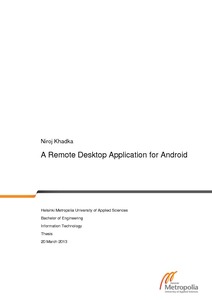 The main goal of the project was to develop a remote control system for computers in an Android platform using Bluetooth 4.0 and Java. The objectives were that the applications would enable connection with the computer via Bluetooth from an Android phone and once connected it would give the user full control of the computer’s mouse and keyboard.

Bluetooth can be the best option for communication between the server and the client as users do not have to pay for the data transfer as in the Internet use. However using Blue-tooth as the communication media limits the scope of the project as the Bluetooth commu-nication range is from 10 meters to 100 meters depending on the version of Bluetooth.

The developed client application in an Android phone can be used to control any Bluetooth-integrated computer running server application using the Bluetooth technology. The applications were well tested in different devices and the client application can run in phones running an Android operating system 2.0 and above 2.0. This project can be further modified by replacing Bluetooth with the Internet for communication. This would allow a user to access the computer from any part of the world.