Differences in images and attitudes created by fashion branding between Spain and Finland : Case study: Zara 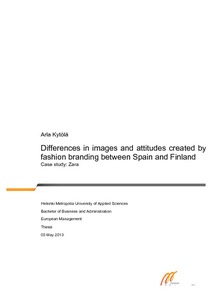 A quantitative survey was used to gather primary data, and books, e-journals and articles were used for secondary data. The findings from the study suggested that there are differences in fashion consumption of Finnish and Spanish consumers. The main findings were the slight differences in money spending habits, as the Spanish consumers spend a bit more money on fashion on a monthly basis than Finnish consumers do. Additionally, the Spanish consumers were found to value Zara more than the Finnish consumers. However, there was no connection between Spanish respondents’ greater value of Zara and Zara being a Spanish brand. Similarly, there was no consumer nationalism towards Zara found from the part of Finnish respondents. The survey found out that the main reasons for respondents from both countries to visit Zara were price, quality, selection and trendy designs.