The Current State of NFC Payments in Finland : An exploratory study on the attitudes and opinions towards NFC payments 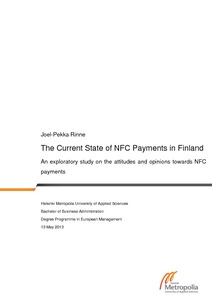 The purpose of this thesis was to try to understand what the current situation with Near Field Communication (NFC) payments in Finland is. NFC is a technology that enables the transmitting of information between two devices in the proximity of each other, via radio signals and has now been implemented also for payment purposes, integrating the NFC feature into credit cards and payment stickers. One of the aims of this study was to help understand if there is consumer demand for such an innovation. Additionally was observed, if the perceived benefits to be received from adopting NFC payments were enough to attract consumers away from more traditional payment methods at the moment. Finally, was explored what have been some of the factors slowing down the introduction of NFC payments to the consumers. In-depth interviews were conducted with two representatives from companies supporting the introduction of NFC payments. The opinions and attitudes of consumers were studied by interviewing six consumers from different demographics. Lastly, observation techniques were used to understand the usefulness of NFC payments in practice. The results indicated that a wider adoption of NFC payments would still take time. The company representatives saw that there would to a certain extent be a demand for NFC payments and that the process of introducing NFC payments to consumers has been long, mainly because of the number of different players involved in the introduction process. More collaboration among the different players should be done in order to educate the consumer on the innovation. The interviewed consumers were highly uneducated on the innovation, indicating a need for information. The perceived benefits of NFC payments were seen to be good, but not yet great enough to attract consumers away from traditional payment methods in great amounts. The limited acceptance of the payment method was seen as a strong deterrent for adopting the innovation. For NFC payments to be more widely adopted, better collaboration among the different players involved in the diffusion process is needed. Informing the consumer about the technology, so as to create demand for it, needs to be a combined effort of all the parties involved in NFC payments. Without efficient co-operation, the diffusion process of NFC payments will arguably continue to be slow and it will still take some time for NFC payments to become a common payment method.