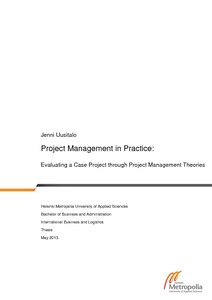 The purpose of this thesis was to evaluate a case project and to study whether it was carried out in a correct manner; meaning that did the case project follow the project management models. In addition, part of the study was to determine what could have been improved in the management of the case project. The case project was about creating and launching a communication channel based on a social media service, on a blog platform called Tumblr, for Team Finland in Spain network. The network promotes Finland and its interests in Spain, and is part of global Team Finland network. The main objective of this thesis was to understand better project management, its concepts and models.

The thesis is conducted using case study research with qualitative approach as the research method. Case study research is an empirical inquiry that investigates a contemporary phenomenon within its real-life context. Following this method, the case project was first observed in real-life context and then evaluated by comparing it to the models presented in project management literature. The qualitative research data was collected during the case project by observation method and included memos, notes and other documents such as the action plan of Team Finland in Spain network.

The result of the study was that the case project was partly following the theories of project management. It was applying some concepts in its project management, for example in areas such as identification of need, communication, monitoring and reporting and evaluating project success. However, there were some areas such as planning project baseline plan, which could have been improved to gain more advantages of the project.