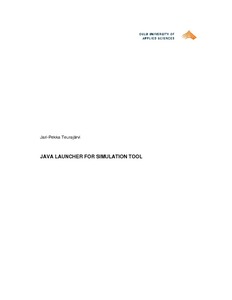 This Master's thesis was commissioned by Nokia. Java MIDlets are applications that can be run in small devices such as mobile phones. In Nokia feature phones, MIDlets can be tested with Simulation tool.

Simulation tool users had a need to install Java MIDlets from the computer file system to the simulation environment file system. The purpose was to implement an easy graphical user interface for Java MIDlet file browsing, selecting and installing.

The final outcome of this work was a GUI application for installing the Java MIDlets from the computer file system to the simulation environment file system. The development proposal detected was to implement an automated start-up of the installed Java MIDlet to the Simulation tool.