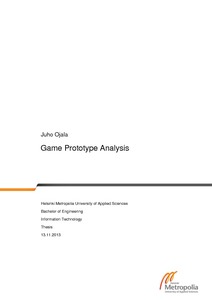 The thesis investigated different production ways of game prototypes and analyses them using an actual game prototype, by codename “Breaker” as a reference. Breaker is produced by Rovio Entertainment Ltd and this thesis contains several confidential sections. These sections are added as appendices and marked as confidential.

The thesis discovers different project management methods suitable for game prototyping and debates between the differences that these methods have, while having the main focus on the methods used in the Breaker. The thesis investigates the pitfalls and general problems that always go together with prototype development, both related to design and programming, having higher emphasis on the programming side. The Breaker code and design will be broken down and analysed for possible improvements in the decision making flow.

The author worked as a programmer in the prototype development team during the two month prototyping stage. Along the author, three other people worked on the project as a programmer, a game designer and an artist respectively.