Design and Implementation of a Smart Home System 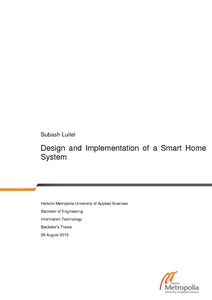 The goal of the project was to implement a smart home by controlling electronic devices at home remotely and to get an alert on intrusion or movement around the restricted premises. The devices were controlled by a mobile phone using the SMS service available and the alerts were also received as an SMS mentioning the activity occuring around the premises.
The application consisted of two units, the microcontroller and the mobile unit. The mobile unit acted as a recipient to get responses from the micrcontroller as well as a controller for giving instructions. Different operations were performed based on the given instructions. In addition to this, the microcontroller unit was responsible for reading input from the sensors. The Arduino platform was used as the system platform with Arduino Uno Board as the microcontroller board. The SIM900 GPRS/GSM module was used to communicate between the microcontroller unit and the mobile unit.
The system could be installed at any place and could be controlled by any mobile phone supporting the SMS service. The mobile phone neither needs to have any special features nor hardware nor any special application to use the system. The system consists of three sensors which are used as heat detector, intrusion detector and motion detector along with a remotely managed light system.
The goal of the project was achieved successfully. However, the system is limited to the availability of the GSM network as the GSM network is responsible for communication be-tween the mobile station and the GPRS module. The project could be extended further by using wireless communication or Internet communication along with the GSM network to reduce the limitation in the absence of GSM network.