Game Development in Unity : Game Production, Game Mechanics and the Effects of Gaming 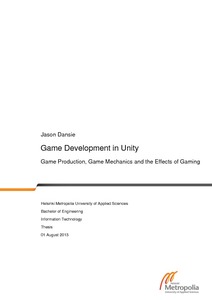 The goal of this thesis is to examine how video games are designed and to see how differ-ent game mechanics work and how to use them in the development of a game, as well as examine what are both the positive and negative effects games have on adults and children.

This thesis looks at how games in general are developed in Unity, a 3D game engine which has become not only popular but a standard in the gaming industry. The thesis describes how the interface in Unity is used to quickly generate game environments, how scripts are used for logic, game interaction and other game mechanics. It demonstrates how a few of these games were made in Unity and also deployed to several different devices and operating systems with several specific games target for children ages four to eight years of age.

Further the thesis shows how deployment to several mobile devices helped to allow users of all ages and backgrounds to be able to test the games. Giving the programming group insight and ideas for improvements to the games being produced. Finally it also takes a look at game addiction, violence in games and the positive effects of games.

In conclusion knowing how violence in game affects a person. As well as how to use games to create positive affects in people. A game developer will know how the games they produce affect the audience they have created the games for. Also a concerned parent can chose a game they feel their children can learn from or use as a positive outlet for anger.