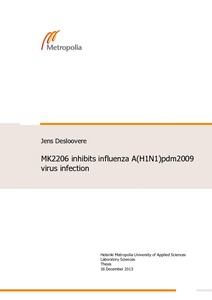 In 2009, influenza A(H1N1)pdm09 virus caused a global pandemic and is now around as a seasonal epidemic peaking from December to March. It was confirmed that influenza A(H1N1)pdm09 is resistant to amantadine treatment. To treat people with severe illness, the World Health Organisation (WHO) recommended using oseltamivir or alternatively zanamivir if there were signs of resistance to the former. Because of the risk for emerging resistance, a next generation of antivirals against the virus is needed.
Recently, studies of influenza virus-host interactions revealed a number of host proteins that are potential targets for antivirals. Special interest goes to Raf/MEK/ERK, NF-κB, PI3K/Akt and PKC signaling pathways (Planz, 2013). It is proposed that inhibition of host factors is less likely to cause resistance and more importantly, a lot of these inhibitors are in development or already approved for other diseases such as cancer . Repurposing of these drugs is facilitated, because much is known about their toxicity and working mechanism.
The present study suggests an important role for Akt in influenza A(H1N1)pdm09 virus infections and that MK-2206 could be further developed as an antiviral against influenza A(H1N1)pdm09 viruses. MK-2206 accumulates in endocytic compartments and blocks the release of the virus in the cytoplasm.