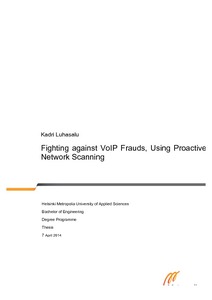 The aim of this study was to examine proactive network scanning as a solution to the most general VoIP frauds in an enterprise environment.

The study examined the VoIP network in detail – the components, protocols and how they work, in order to understand the vulnerabilities that are exploited during VoIP frauds. The most popular and most damaging frauds were listed and explained.

From there, the study focused on the first steps in attacking and protecting the VoIP network – footprinting, scanning and enumerating.

In the last part of the study, the scanning was tested on real network segments. The results were analyzed – many open ports were found and gained access to, which means the system can be attacked very easily. The study recommended using proactive scanning against attacks and frauds as a basic intrusion prevention system, which can be build into a better system in the future as attacks become more advanced every day.