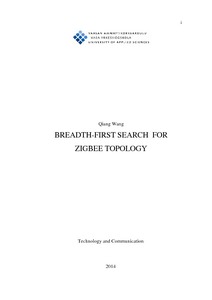 In order to improve the performance of Zigbee tree topology, Breadth-First Search has been proposed in this paper. Zigbee is a wireless standard for Ad hoc networks based on the IEEE 802.15.4.It was originally designed for low data rate, low energy consumption and low cost Wireless Personal Data Networks (WPANs). Because of these characteristics, Zigbee is expanded to be used in Wireless Sensor Networks (WSNs) for industrial use. Because of the structure and characteristics of the Zigbee network, data packet might travel through unnecessary paths until it reaches the destination, which will consume extra energy. In order to optimize the transmission route, the Breadth-First Search has been proposed for the Zigbee tree formation in this thesis. The implementation of Breadth First Search begins at the coordinator node and connecting the nodes, which are in transmission range. Then for each of the children nodes, respectively, it connects their children nodes, which have not been connected. The method used in this paper was using Breadth First Search to establish the network, which greatly reduces the network depth. Due to the reducing depth, the hop count compared to the original tree routing was also reduced. This thesis also compares the orphan node problem of the original tree routing and Breadth-First Search tree routing. The result is that the number of orphan nodes in Breadth First Search was significantly decreased.