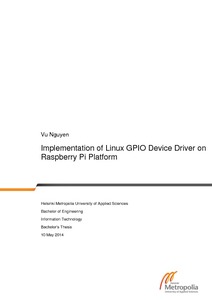 The project was aimed at implementing a General Purpose Input/Output (GPIO) device driver for the Raspberry Pi model B rev 2.0 platform. Specific attention was given to implement the device driver based on the Linux character device driver.

Each of the GPIO pins on Raspberry Pi is exposed to userspace for use by a device file in the /dev directory. While a dynamically assigned major number was used to identify the device driver associated with the GPIO device, a minor number was used by the kernel to differentiate between GPIO pins that the device driver controls. Four entry points were
implemented to handle low-level hardware GPIO resources on behalf of system calls requested by a userspace application. Besides, interrupt handling was implemented as an experimental feature to see how a device driver supports interrupt in an embedded Linux system.

The GPIO device driver could be used on the Raspberry Pi platform by loading it either as a kernel module or as an integral component of the Linux kernel. One or more userspace processes could open a device file for reading the logic level of a GPIO pin, controlling the direction of a GPIO pin, and setting its logic level to high state or low state. Besides, interrupt handling feature was tested; the result showed that more than one process could share an interrupt resource on a GPIO pin and could disable interrupt on that GPIO pin.

There still remain, however, some limitations to the features offered by the driver. Interrupt handling is still an experimental feature. More work needs to be done to make the feature useful for use. Furthermore, the GPIO character device driver is deprecated with a newer version of the Linux kernel by the gpio-sysfs driver.