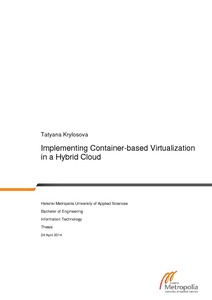 The goal of the project was to set up a hybrid cloud infrastructure where cloud bursting could be potentially implemented for application and system deployment using lightweight container-based virtualization. The project aimed to explore and discuss the features, benefits and challenges of cloud computing and particularly of the hybrid cloud approach.

The hybrid cloud concept implies the use of public cloud services alongside the internal facilities. Google Compute Engine was used as a public cloud service providing Virtual Private Cloud functionality. Interconnections between the clouds were created using OpenVPN, a functional and secure open source VPN solution. The implementation of container-based virtualization in the hybrid cloud was tested with Docker, the new promising software facilitating flexible application deployment.

The result of this project was a hybrid cloud test environment combining the internal resources at Metropolia premises and Google Compute Engine cloud. The project confirmed that Docker containers and OpenVPN tunnels could be successfully used to create a hybrid cloud infrastructure with the potential of further enhancements through cloud bursting mechanisms. In the future, the containers management can be automated by employing additional tools, such as OpenStack Nova, which, in combination with Docker, would provide a powerful tool for application development and deployment in a cross-cloud environment.