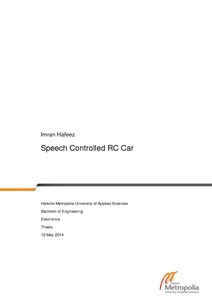 This thesis is based on Final Year Project, which falls under the category of embedded systems. The Aim of this project was to modify a small remote control (RC) car and drive it by using speech commands based on EasyVR module and Arduino microcontroller.

Theoretical background is provided for the reader to understand the basics of embedded system and its categories. It also provides the understanding of interface connection, communication modes between the input/output components of microcontroller and external I/O devices.

It is described in the report about the hardware components involved in the making of the system such as Arduino microcontroller board, motor shield, EasyVR speech recognition module, DC motors of small RC (remote control ) car. Then it is described that how the hardware is integrated and which programming language was used to get the desired output. Coding done for the system is provided in the appendix 1.

Result of the project is satisfactory but it also has its limitations. Reasons are mentioned for the limitations of the system along with the suggestions for the future enhancements and the conclusion for this FYP.