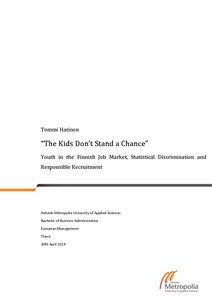 Youth often experience difficulties in entering the labour market, especially during economic downturns when cyclical unemployment worsens the situation. While outright age discrimination does not provide a satisfying answer to the question; why are youths in an unfavourable position in the job market, the concept of statistical discrimination seems to offer a convincing explanation. Statistical discrimination means grouping candidates according to one characteristic, such as age or foreign background and screening the group out of the recruitment process altogether, often at an early stage. Studies show that a prejudice against young people exists, which means that young age is potentially used as a screening device in recruitment. The objective of this thesis is to investigate to what extent statistical discrimination against the youth occurs in the Finnish job market. Special focus is on the retail sector that is considered one of the most important employers of young, inexperienced people and an important pathway through which the youth enter the labour market. Moreover, the possibility of promoting better, more responsible recruitment practices in companies through job creation schemes is examined. As a reference, the Youth Guarantee scheme by the Finnish government is discussed. The research is conducted by means of an extensive literature review supported by a qualitative primary research. The primary data is obtained through an interview with the head of HRM of Kesko, the second biggest retail conglomerate in Finland. In addition to literature on statistical discrimination per se, the theme of youth in the job market is discussed from alternative perspectives, such as youth unemployment, marginalization and level of responsibility in recruitment practices.

The findings are reassuring: although it was proven that statistical discrimination occurs with a young person often as its victim, in the Finnish context participating in a job creation scheme and receiving a wage subsidy is not considered a bad signal. Thus, job creation schemes like Youth Guarantee have potential for positive, immediate results as well as for long-term changes in the recruitment culture, should the better practices promoted by schemes be adopted in the companies.