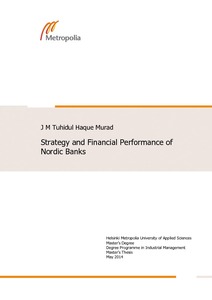 This study focuses on the correlation between strategy and financial performance of Nordic Banks observed over the period of 2008 to 2012. The main objective of the study was to overview what types of strategy have been used by the Nordic banks except Iceland and the financial results of it. This study is limited to the financial institution within the banking sector of the Nordic countries except Iceland. Additionally, in order to successfully complete the study, the required data were collected from 29 Nordic banks available from the online archives and websites, and limited to a 5-year period, from 2008 to 2012.

The research was carried out using the Nordic banks yearly annual reports from the target banks own online achieves. All the collected raw data were first categorized and combined into Microsoft Excel file for further analysis. Then, the collected data were analyzed using Mann-Whitney U test for the period from 2008 to 2012.