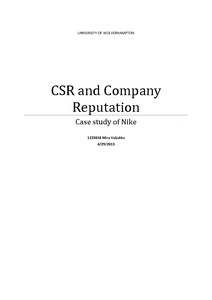 During the 21st century, we have seen an enormous increase in the popularity of CSR, in corporate level as well as in public media. Society’s consciousness on the effects of individual behaviour has risen with increased awareness on environmental and societal issues such as global warming and human rights. Corporate catastrophes, such as BP oil spill in Gulf of Mexico in 20101, which was the biggest oil spill in history of United States, has woken companies to protect their CSR reputation.

According to study by Visser and Tolhurst (2010) one of the main drivers of increased CSR is growing globalisation which brings benefits and disadvantages to economic development throughout the world giving businesses even more decisive role across all levels of society. More opened global market has combined different cultures bringing problems with corruption and bribery as well as with different ethical conducts. Issues such as sustainable production, labour standards or cultural and societal implications of development do not have mutual norms but cannot be left to be decided solely in the market place (Visser and Tolhurst, 2010).

Due to globalisation multinational corporations (MNCs) are conquering the global markets. MNCs are major actors in the society and together with their large supply chain channels they have a strong influence on what it is going on in the markets. Many MNCs have shown their interest towards environmentally and socially aware contributions, such as charity campaigns, introducing new codes of conducts to suppliers to nurture employee rights and improve environmental standards