Sorry, do you speak English? : A research study on how performance in Finnish affects the well-being at work of foreign employees in Finland 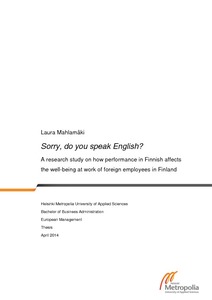 As migration constantly increases, diversity in the workplace has also increased in Finland. In order for organisations to benefit from a diverse workforce, successful diversity management should be carried out.

The purpose of this thesis was to study whether the lack of or poor performance in Finnish affects the well-being at work of foreign employees and if so, to what extent, and whether it influences more the actual work performance or the social well-being of the employees. The focus was on the social and mental well-being of foreign workers and the question was addressed through mastery at work and social interaction of employees.

The research was conducted as a quantitative study carried out with a survey questionnaire. To deepen the knowledge on the topic, the quantitative part was followed up by an additional qualitative study that included three interviews. The questions of the survey and the interviews focused on basic aspects of well-being at work. The findings were analyzed quantitatively and qualitatively.

The findings suggest that overall, foreigners in Finland seem to be very satisfied with their well-being at work, both socially and mentally. Furthermore, the results indicate that there is some relationship between language and occupational well-being, but the level of Finnish is not a major contributor. The mother tongue and working language of the respondents affected especially the mastery at work; those who worked purely in English were less or not at all affected by the lack of knowledge in Finnish.