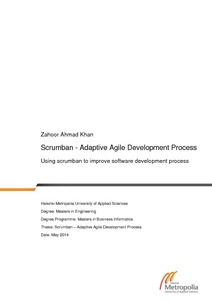 This thesis concentrates on improving the existing agile software development process used in the case company in order to overcome the various problems faced during the product development based on the existing Scrum model. The case company, consisting of sixty five employees, turns any online content, images, videos and applications into interactive and viral storefronts by means of non-intrusive and content relevant advertisement products.

After describing the research objective, researcher started with the current state analysis of the agile scrum process within the Applications Development team of the case company. Qualitative research methodology was utilized in this study. The data for current analysis was collected based on interview discussions, analyzing past sprint retrospectives, and sprint velocity data. The participants used for interviews and discussions were from various backgrounds and departments of the case company and included experts such as, Scrum Master, Product Owner, Product Manager, Quality Assurance Team, Team Manager, Operation Manager and Software Developers. Overall eight (8) persons were interviewed. Based on current state analysis and literature review, a new process model was defined by the researcher. This research model was further improved after gathering qualitative re-search data from different stake holders and experts mentioned earlier. The new proposed process model was further pilot tested in the case company for four iterations. The results and final conclusion from the piloted iterations were further documented in this study.


The results from the pilot testing indicated that the new process model has provided the needed flexibility to the team and product owners, work flow across different stages of process has improved, team collaboration has improved and in addition team is constantly improving their work policies.