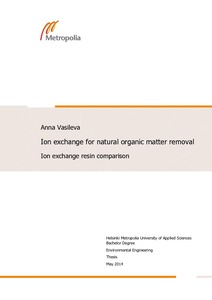 The purpose of this thesis was to evaluate the efficiency of different types of ion exchange resins in terms of natural organic matter (NOM) removal from drinking water.

The experimental part of this project was done at the facilities of the University of British Columbia, Vancouver, Canada. The project is a part of comprehensive study of IEX resin for NOM removal conducted at the Engineering and Biological Department of the University.

Several experiments on resin saturation and regeneration were performed. The multiple loading tests were conducted for resin saturation. Seven loadings were applied to saturate the resin, which was equivalent to 700 bed volumes. During experiments samples were taken and analyzed for NOM residuals with a by spectrophotometer and a TOC analyzer.

The findings of this thesis can be applied to producing a pilot-scale installation. Further research is needed to evaluate the resin performance in larger scale.