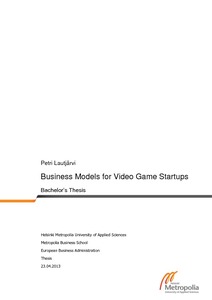 Video games have emerged from a niche market for geeks into a booming industry worth billions of dollars annually catering to hundreds of million people spending billions of hours weekly with their favorite games. The industry has been dominated by several large publishers after years of consolidation, but with the continually lowering barriers to entry and increasing interest and laissez-faire in the field, new players have begun emerging in the form of startups. Though many fail without ever even breaking the news barrier, many others have become household names, such as Rovio, Supercell, Housemarque and Mojang. These new success stories make use of various business models, though trends have begun to emerge, such as the move towards a fully-digital distribution model and the solidified mechanic of in-game transactions. Though the platforms may be different, many of the same rules of business apply for the mobile devices, computers and home consoles alike.

By studying these business models, their inherent strengths and weaknesses as well the opportunities available to them and threats facing them we can provide a better understanding off the industry and a more stable future for what is increasingly becoming the world's favourite pastime.