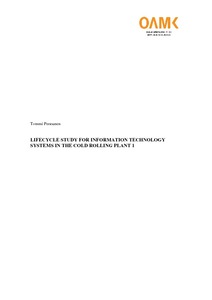 The purpose of this Master’s thesis was to identify the status of the lifecycle for the IT components used in the production in Cold Rolling Plant, Outokumpu Tornio Site. Other purposes were to clarify the availability of support and spare parts, and to analyze if the components can be upgraded or replaced with newer ones.
One purpose was also to get a view of the used equipment in production lines and to study methods for lifecycle management.
This study covers the basics provided by ITIL and the global manufacturers, ABB and Siemens. The study included field surveys and spreadsheets were created based on the surveys. During the field surveys, all IT components were photographed and finally over 700 photos were analyzed with a system documentation.
This study and the result from the field surveys can be used as a base for the IT system development and for developing daily routines. It gives views for the lifecycles and used equipment in the IT systems in the production and acts as a successful approach for collecting data from the field. The results are company confidential information and separated from the published version.