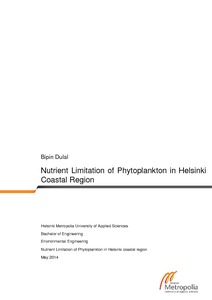 Bioassay factorial design experiments were carried out to study the limiting nutrient in Helsinki coastal area during the summer of 2013. The study also focused on finding out cost effective methods for modelling the phytoplankton responses and for identifying the particles and determining their density.

Nutrients (80 µg NH4-N l-1 and 20 µg PO4-P l-1) were added to the 1 l water samples as per the 22 factorial design and chlorophyll concentration and chlorophyll fluorescence were measured regularly for 4 days. Sample bottles as well as the measurements were replicated. Polynomial regression method was used to analyse the time series data obtained from both methods, and significant coefficients were chosen on the basis of their p value than with normal score plots. The sample water of Day 0 and Day 3 were analysed with FlowCam and a microscope to identify the particles and to measure their density.

Chlorophyll concentration and chlorophyll fluorescence were measured separately to see the phytoplankton response to the added nutrients. The models obtained from the two different methods showed nitrogen as the limiting nutrient in Helsinki sea area. Chlorophyll fluorescence method was proposed for studying limiting nutrient in regular monitoring processes as it was found to give similar results faster and with lower cost than the chlorophyll concentration method. Taxonomical identification and particle density measurement were easier and faster with the FlowCam device than with the microscope.

Throughout the summer of 2013, nitrogen behaved as a limiting nutrient in Helsinki Sea area. Only four sampling stations within the range of 2 km from the main outlet of Viikinmäki Wastewater treatment plant were used. A few more sampling stations further from the outlet can be added in future monitoring program to study the co-limitation behaviour of nutrients or phosphorus domination.