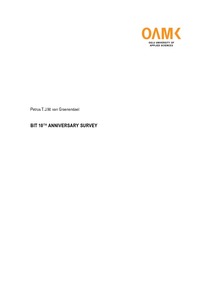 The research task was completed in two parts. Firstly, preliminary research was done in order to build a theoretical foundation in order to familiarize the subject with the topic, as no previous research has been conducted about BIT degree programmes in Finland. Secondly, a practical research part was developed in the form of a survey, and sent out to 79 graduates, of which 28 responded in a survey and two agreed for an in-depth interview.

The main conclusion, which can be drawn from the survey results, is that BIT graduates are doing very well in their current occupation, as 92.9% of the respondents had found an active occupation in employment or additional studies. Additionally, feedback on the degree programme was relatively good, although many students suggested that the course curriculum was too broad and unspecialized and requested more specific courses and/or the option to pursue minor and major study subjects.