Development of a Musical Rhythm Game for iOS 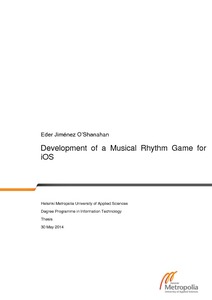 The aim of this project was to face the game development process from every perspective, assuming the roles of a game designer, graphic artist and programmer to create a musical game that trains the musical ear while improving the rhythm skills of the player.

The project consisted of the development of a 2-D rhythm game for iOS, specifically for the iPhone. Starting with a study of the actual market, the mechanics of other successful musical games were analyzed. Next, an iterative game design process was established, including the concept, story and mechanics of the game, which directly influenced the implementation. Using Sprite Kit as the rendering engine and Core Audio for the audio synchronization, the game was implemented natively using Objective-C as the programming language.

This project resulted in the first stable version of the game. The main objectives were achieved and some flaws were found through user feedback. Although not ready for publication, the result of this project constitutes a robust starting point for further development.