Illicit drug use among Finnish children: channels of acquisition 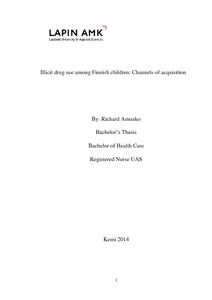 This thesis was conducted on the topic ‘illicit drug use among children and adolescent’ with the main purpose of describing the channels the under-age use in acquiring illicit drugs. The objectives were to describe the means children use in acquiring illicit drugs and also to determine the most abused drugs as well as describe the effects illicit drugs have on children and finally map out strategies to help prevent illicit drug use among children. The thesis was conducted as part of the Arctic Children InNet program and hence a self-awareness educative social media tool was created for participating children.
The research design of the project was literature review and content analysis was used in analysing the data collected. A systematic literature review was undertaken and the findings were discussed in the body of the thesis.
Some of the findings and conclusions drawn from the data analysed were that no ‘true market’ of illicit drugs exist in Finland such as those that fit an open market definition for illicit drugs trade. No internet website was found in Finland offering illicit drugs for sale however; Finnish youth procure illicit drugs via internet from foreign countries. Other findings are home-cultivation of cannabis has become the primary source of cannabis acquisition among adolescents and the general population as a whole. Close relations and friends remains the most profound source of drug acquisition among the adolescents. Recommendation of the thesis includes ‘parents must store their legal drugs (alcohol and tobacco) under double locks’ and ‘the formal education sector should inculcate illicit drug health education into the curriculum’.
Key words: sources, drugs, children, illicit drugs and Finland, Finnish adolescents and drugs, effects on adolescents’ drugs and society.