The role of state institutions in the process of economic development : A study of the Italian Mezzogiorno 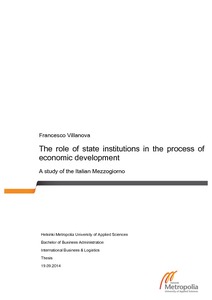 Institutions are part of our everyday life and constitute an important and binding agent of societies. Institutions in fact are, above all, organizations whose role is to organize the way people interact. Institutions have been defined as ”a set of socially prescribed patterns of correlated behaviour” (Paul D. Bush 1987: 1076) or as “the humanly devised constraints that structure political, economic and social interaction. They (institutions) consist of both informal constraints (sanctions, taboos, customs, traditions, and codes of conduct), and formal rules (constitutions, laws, property rights)” (Douglas C. North 1991)

The “Mezzogiorno d’ Italia” is a macro region with economic and cultural connotations that are different from the rest of the Italian Peninsula. This macro region corresponds, to a large extent, if not fully, with today’s “South”. The regions to which the area corresponds are: Sicily, Sardinia, Abruzzo, Basilicata, Campania, Calabria, Puglia and Molise.

This study will discuss the cultural and economic divide between the North and the South of Italy while attempting to highlight that institutions have an important role in shaping the development and economic growth of a nation. To provide the reader with the necessary level of contextualization this paper discusses elements of historical, geographical, economic and anthropological nature, which contributed to the markedly distinctive character of the South of Italy.

This report discusses the concept of institutional change and presents a perspective on theoretical approaches developed on the issue of societal evolution. One approach is developed in the context of neoclassical economics, which uses methodological individualism. The second one, which is ideologically closer to the tradition of Original Institutional Economics (OIE) or American institutionalism, and in its analysis of economic theory applies methodological holism. We discuss the ideas of Professor Douglas C. North on societal and institutional change, while also presenting the ideas brought forward by Veblen, Bush and other various scholars. This research also attempts to address the question of the influence that values have on institutions’ effectiveness and design, and institutional change.

Furthermore we discuss the importance of culture in determining the values that are shared by a civilization and we highlight how cultural differences can be determinants of the relationship that is established between people and institutions. We also introduce Hofstede’s studies on cultural dimensions and we debate on the impact that those have in economic development.

Finally we partially examine the role that IRI, the Italian Institute for the Industrial Reconstruction, had in development of strategic industrial sectors in the South of Italy and, with reference to the arguments of Mazzuccato and Eisinger, we propose that demand side economic policies, and hence an entrepreneurial role for the state, are essential conditions to generate economic growth.