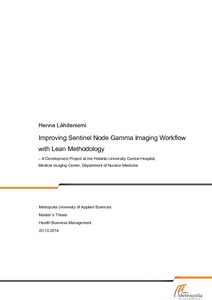 Background
One in eight women gets a breast cancer at some point of their lives. In 2012 there were 4 694 new breast cancer cases in Finland. The surgery is as breast conserving as possible. To find whether cancer has spread to sentinel nodes, sentinel node gamma imaging is performed. Axillary evacuation is only performed if cancer is found in sentinel nodes. (Joensuu, Heikki 2007: Syöpätaudit. Section 32 Rintasyöpä)

Aim and Purpose
The aim of this development project was to standardize practices, increase patient safety and increase efficiency. The purpose of the project is to guarantee more equal service for all the patients having sentinel node gamma imaging, independent on the performing technician.

Methods and Process
Because of the high incidence of the breast cancer, sentinel node gamma imaging is the second common study in the Nuclear Medicine Department. For workflow improvement needs Lean methodology was selected. The Lean team was multi professional consisting of doctors, a physicist, laboratory technicians, and a radiographer. Tools used to analyze workflow were VSM, spaghetti diagram, 5S and throughput time following. The project lasted from January to June 2014, and the first changes were implemented already during spring.

Results
Lean team implemented 11 changes, which was more than expected. The project produced for example four new guides, more free camera time, reduced injection doses and a visual confirmation about injection spot. However the greatest success was that continuous improvement holds strong even after the project was finished, meaning that Lean culture has adopted in Nuclear Medicine Department.