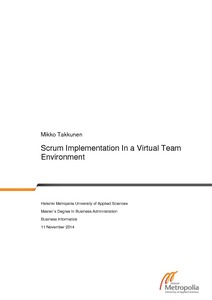 Following globalization, cost optimizing and rapidly developing technical resources, virtual teams are becoming more relevant in the contemporary workplace. Virtual teams present their own challenges which can make it difficult to analyze root causes for performance issues. Competence issues with individual team members might not always be the problem, as running virtual teams require different approaches than conventional, co-located teams.

Virtual team was experiencing different performance problems which were hard to pinpoint exactly. Questionnaire and a survey were used to create a SWOT and help identify the problems in more detail. After this, a conceptual framework of virtual teams and different software development methods was studied to deepen understanding about the nature of the problems. An agile software development method, Scrum was identified as a tool that could improve the issues the team was having problems with. Scrum was implemented following strictly its rules and the team used it daily for approximately 4 months. After this period, the same survey that was used to identify the problems in the beginning was sent again. The team felt that all performance issue areas were improved after Scrum was introduced. The team will continue using Scrum and it is now being adopted to other business units as well.


The study suggests that there are similarities between typical virtual team challenges and the strengths of using Scrum. The results of this thesis can be used to show that Scrum provides tools to increase virtual team performance.