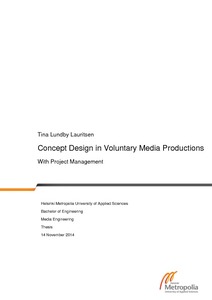 The aim of this project was to create a concept for an advertising campaign for IT & Media Engineering study program at Metropolia UAS. The concept should be shown with a visual implementation, in the form of a 30 second long video.

The goal was to be reached through project management, with students volunteering to help carry it out. This was mainly done at meetings where the relevant topics for the week were discussed, and then implemented during the practical work, such as recording and editing.

The result of this process was a video named the Pilot, and a concept describing how to create a similar video for another degree.

The thesis as a whole is very important for the person who is to continue the advertising campaign. It provides a guide on how to implement the concept, and what to be aware of during the process. It is recommended to have a close look at the theory part, so it is clear what has to be done before starting the project. This will also make it easier to avoid some of the problems that occurred during this project. These were problems such as lack of planning and keeping the group motivated. Overall it is a guide to ensure success in future implementations.